Being a Summary of Consciousness & Its Phases

Note: In this Upanishad, the terms “Vaishvanara,” “Taijasa,” and “Prajna” (pronounced “Pragna”) are used as synonyms in place of “Jagrat,” “Svapna,” and “Sushupti.” 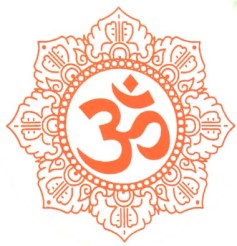 1. AUM means Akshara, the Indestructible and Imperishable. It stands for the Supreme Reality. It is a symbol for what was, what is, and what shall be. AUM represents also what lies beyond past, present, and future. All this is nothing but AUM. All that is also nothing but AUM.

2. Brahman is all, and the Self is Brahman. This Self has four states of consciousness.

3. The first is called Vaishvanara, the waking state, in which one lives with all the senses turned outward, aware only of the external world.

4. Taijasa is the name of the second, the dreaming state in which, with the senses turned inward, one enacts the impressions of past deeds and present desires.

5. The third state is called Pragna, deep or dreamless sleep, in which one neither dreams nor desires. There is no mind in Pragna, there is no separateness; but the sleeper is not conscious of this. Let him become conscious in Pragna and it will open the door to the state of abiding joy, the Turiya state.

6. Pragna, all-powerful and all-knowing, dwells in the hearts of all as the ruler. Pragna is the source and end of all.

7. The fourth is the superconscious state called Turiya, neither inward nor outward, neither conscious nor unconscious, beyond the senses and the intellect. It is the stateless state, in which there is none other than Brahman – One, without a second. Brahman is the supreme goal of life. It is infinite peace and love. Realize Brahman!

9. A stands for Vaishvanara. Those who know this, through mastery of the senses, obtain the fruit of their desires and attain greatness.

10. U indicates Taijasa. Those who know this, by mastering even their dreams, become established in wisdom. In their family everyone leads the spiritual life and no-one is born who does not know Brahman.

11. M corresponds to Pragna. Those who know this, by stilling the mind, are unified with Brahman and, finding their true stature, they inspire everyone around them to grow.

12. The mantra AUM in its completeness is without aspects or sounds and stands for the supreme state of Turiya, the blissful Silence which is beyond birth and death, and without a second. Those who know AUM as the Self become the Self; truly, they become the Self.

SOME RELATED ARTICLES: Atman – The Higher Self, The Impersonal Divine, 12 Things Theosophy Teaches, The Sevenfold Nature of Man, Gandhi on Blavatsky and Theosophy, The Life & Times of Adi Shankaracharya, The Theosophy of the Bhagavad Gita, The Three Gunas, Tat Tvam Asi – “Thou art That!”, Higher Kundalini and Lower Kundalini, Ramalingam Pillai and the Theosophical Movement, Our Mother India, A Yogi’s Meeting with a Himalayan Mahatma, Who are you, Madame Blavatsky?, and Is Theosophy Hinduism, Buddhism, or Something Else?

“Those who search for the highest must go to the right source of study, the teachings of the Upanishads, and must go in the right spirit.”
~ H.P. Blavatsky, The Doctrine of Avataras ~

4 thoughts on “The Mandukya Upanishad”