Q. There seem to be strong traces of both Hindu and Buddhist philosophy in 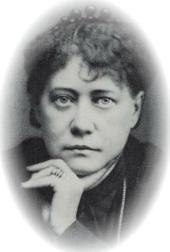 the teachings of Madame Blavatsky and the Mahatmas. I know that both she and the Masters of the Trans-Himalayan Brotherhood described themselves as Buddhists but what actually is the Theosophical teaching? Is it a form of Buddhism or a form or Hinduism or a blend of the two or what?

A. Speaking on the superficial level it would be reasonably correct to describe the teachings of Theosophy as the perfect blend of Hinduism and Buddhism. Gandhi met H.P. Blavatsky in London and later said that it was her book “The Key to Theosophy” which helped him to realise the greatness of his own Hindu religion and which saved him from being converted by the Christian missionaries in India. It is also a little known fact that his first introduction to the Bhagavad Gita, which became his most beloved scripture, was through HPB’s associates and colleagues in London. He wrote that “Theosophy is Hinduism at its best.” On the other hand, the famous Buddhist scholar D.T. Suzuki described the teachings of HPB as “the real Mahayana Buddhism.” So which is it?

It is certainly true that none of the hundreds or thousands of popular books about Buddhism and Hinduism which flood the market today contain anywhere near the deep perfection and explanation of the living philosophies of those religions as is found in Theosophy. Of course we’re referring to the original and genuine Theosophy and not the westernised Christianised pseudo-Theosophy which came about in some quarters following HPB’s death.

Theosophy distinctly states that Hinduism and Buddhism are the two “truest” religions in the world, yet the motto of the Theosophical Movement is “There is no religion higher than Truth.” Truth transcends all religions and cannot be contained or put in a box. The word “Theosophy” comes from “Theo-sophia,” literally meaning “Divine Wisdom.” It is asserted that there is a primeval, archaic philosophy or doctrine or body of Knowledge – for want of a better word – which is not just a truth but which is the Truth itself. All the different religions have contained and presented some portion of the Truth, some to a greater extent or degree than others.

Theosophy maintains that TRUTH exists and it uses aspects of Hindu and Buddhist philosophy to help it present some of this Truth to the world, since in many aspects those teachings express Truth perfectly as well as exquisitely.

“The Secret Doctrine” says that “the Esoteric philosophy is alone calculated to withstand, in this age of crass and illogical materialism, the repeated attacks on all and everything man holds most dear and sacred, in his inner spiritual life. The true philosopher, the student of the Esoteric Wisdom, entirely loses sight of personalities, dogmatic beliefs and special religions. Moreover, Esoteric philosophy reconciles all religions, strips every one of its outward, human garments, and shows the root of each to be identical with that of every other great religion. It proves the necessity of an absolute Divine Principle in nature. It denies Deity no more than it does the Sun. Esoteric philosophy has never rejected God in Nature, nor Deity as the absolute and abstract Ens. It only refuses to accept any of the gods of the so-called monotheistic religions, gods created by man in his own image and likeness, a blasphemous and sorry caricature of the Ever Unknowable.” (Vol. 1, Introductory, p. xx)

The teachings of Theosophy go further than the known teachings of Hinduism and Buddhism though and alongside such fundamentals as Karma, Reincarnation, and the Oneness of All Life, they also present certain esoteric spiritual teachings which had never been given out to the public before, such as those about the origin, nature, and future of Earth and humanity (including planetary chains, globes, rounds, root races etc.), Atlantis and Lemuria, the true details of the afterlife state and what happens between death and rebirth, the sevenfold nature of man, the true nature and system of evolution, and the birth, origins, and structure of the Universe.

So Theosophy is said to not only be the perfect synthesis of religion, philosophy, and science and the esoteric teaching which underlies all the world’s religions but it is further said to be the SOURCE of all the Truth in all the religions, philosophies, and sciences of the world. So we have Theosophy as the Theosophia – the Ageless Divine Wisdom and Timeless Truth – and then we have Theosophy in the sense of the particular teachings that were permitted by the Masters of the Wisdom (the guardians of Truth) to be given to the world through the Theosophical Movement. If you can understand the meaning, Theosophy is a presented portion of THEOSOPHY. Although it has not been widely recognised or properly appreciated as such, the making available to the public of previously secret and carefully guarded aspects of the Esoteric Teaching – by the Masters and through their direct agent Helena Blavatsky – was a unique and monumental world event.

* This article is only very brief and introductory. To discover more about some of the things mentioned here, please see Theosophy – An Explanation and Overview, 12 Things Theosophy Teaches, Gandhi on Blavatsky and Theosophy, The Theosophy of the Bhagavad Gita, The Two Paths, Alaya – The Universal Soul, An Invitation to The Secret Doctrine, Praise for H.P. Blavatsky and Theosophy, Unity of the World’s Religions, Theosophy and the Brotherhood of Religions, and William Q. Judge’s “New Era of Western Occultism”.

“We say it again: archaic Occultism would remain incomprehensible to all, if it were rendered otherwise than through the more familiar channels of Buddhism and Hinduism. For the former is the emanation of the latter; and both are children of one mother – ancient Lemuro-Atlantean Wisdom.”