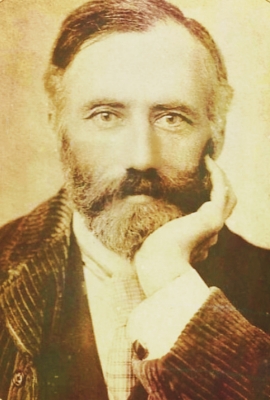 possesses, to portray truly the nature of the one who lived among us under the name of William Q. Judge. Yet there is knowledge of him and of his work for, and relation to, the Theosophical Movement, which is of moment to every student of Theosophy. The object of this article is to place before the reader some considerations which may lead to a true appreciation of him and his place in the most important movement of modern times.

“It may seem to some that this will be the laying of too great stress on a personality, a fault to which humanity is prone and in regard to which not a few have learned to be fearful. But it is hoped that it may be shown that while a person is indicated, the real object is to point to a source in which personalities play a necessary part as Messengers to the world of men: having determined the real Messengers, we are then in the position to obtain the Message of Theosophy pure and simple, and can begin its study on a sure basis. . . .

“The basic enquiry, therefore, would lie in the triple question: “What is Theosophy; whence came it; who brought it?” . . .

“Find the right persons and you have the presentation of Theosophy pure and simple. Then, and then only, is one in the position to know whether any claim or statement affirmed to be Theosophical, is so or not.

“In 1874, a year before the formation of the Theosophical Society, H. P. Blavatsky and William Q. Judge met in New York. In regard to this meeting Mr. Judge wrote:

“Not as a questioner of philosophies did I come before her, not as one groping in the dark for light that schools and fanciful theories had obscured, but as one, who, wandering many periods through the corridors of life, was seeking the friends who could show where the designs had been hidden. And true to the call she responded, revealing the plans once again, and speaking no words to explain, simply pointed them out and went on with the task. It was as if but the evening before we had parted, leaving yet to be done some detail of a task taken up with one common end.”

“These words must accurately describe a fact: yet, if they stood alone, some might question them. Fortunately for our correct understanding, they do not stand alone, but are confirmed in many ways and at different times by H. P. Blavatsky herself in printed and written records. We cannot question her veracity without questioning Theosophy which she brought; Theosophy proves itself to be true and confirms her truthfulness. If then, H. P. Blavatsky and William Q. Judge mutually record their recognition of each other, and their relation in the work, the meaning is plain.

“When H. P. Blavatsky left America, the land of her adoption by naturalization, and the birthplace of the Theosophical Society, she left her colleague, William Q. Judge, to carry on the work in that country which she declared was the cradle of the new Race, and held the crest wave of advancing civilization. It must be apparent that for such a task there would be selected the one best fitted to lay down the lines needed for the great end in view. Error cannot be charged in a matter of such great importance without practically denying the existence of Masters, Their knowledge, and Theosophy itself, for they all stand or fall together. . . .

“What is Theosophy? It shows itself to be as divine a message as any ever given to the world of men, and a more complete one. Who, or what then would be its Messengers? Who but those of that great Brotherhood of perfected beings who, out of Their great compassion, ever work for the ideal progression of humanity.

“H. P. Blavatsky and William Q. Judge, in their capacity of Messengers, cannot be separated; They stand or fall together. Those who are found belittling one, will be found belittling the other. Their writings are mutually corroborative and complementary. Studied together, they embody the noblest religious ideal, the highest all-inclusive philosophy, the most practical application; giving the science of life, the art of living, the very knowledge that humanity stands in crying need of.

“Let those then who would understand the Theosophical Movement, Theosophy, and its Messengers, consider that it might be true that the persons known to the world as H. P. Blavatsky and William Q. Judge, were but the mortal garments assumed by beings of a higher order; let Their writings be studied from this point of view, and it is certain that a great light will dawn, where before, there was darkness and confusion.”

– Robert Crosbie, “William Q. Judge and The Theosophical Movement” (from the first issue – November 1912 – of Theosophy Magazine, the main monthly publication of the United Lodge of Theosophists)

HPB held him in higher regard than she did any of her other colleagues or associates, including Col. Olcott, who ended up being grievously disloyal to HPB and the work of the Masters.

HPB never spoke of anyone in such consistently glowing and occultly significant terms as she did of William Judge.

There’s no valid reason at all for there to be division, disagreement, or lack of unity amongst Theosophists and Theosophical organisations in regard to the nature, work, and conduct of this great soul. Untouched by scandal and ever representative of honesty, decency, and integrity, as well as ever faithful and unflinching loyalty to the Masters, Their Message, and Their Messenger HPB, he was the primary point of connection between the Lodge of Adepts and the Theosophical Movement after HPB had passed away.

Here are some facts and statements of which all of us ought to be aware:

* She wrote that he was the Antahkarana, the connecting link between “American thought and the Indian – or rather the trans-Himalayan Esoteric Knowledge.”

* She said that he was “the chief & only agent of the “Dzyan” in America.”

* She once referred to him as “my friend, brother, and son.”

* During the closing years of her life, whilst living in London, she always kept a picture of him close by her bedside.

* In various private letters, both to him and to others, she remarked that she trusted him “more than anyone in the world” including Col. Olcott.

* Her referring to him as “my only friend” was not a one off thing but was repeated frequently, both to him and others, over the course of several years.

* “If W.Q. Judge, the man who has done most for Theosophy in America, who has worked most unselfishly in your country, and has ever done the bidding of Master, the best he knew how, is left alone…then I say – let them go! They are no Theosophists: and if such a thing should happen, and Judge be left to fight his battles alone, then I shall bid all of them an eternal good-bye. I swear on MASTER’S holy name to shake off the dust of my feet from every one of them … I am unable to realize that at the hour of trouble and supreme fight … any true Theosophist should hesitate for one moment to back W.Q.J. publicly and lodge in his or her protest. Let them read Master’s letter in the preliminary. … All that I said about W.Q.J. was from HIS words in HIS letter to me. … Do with this letter what you like. Show it to anyone you please as my firm determination.”

* She remarked with significant emphasis that she was “His ever and till and AFTER death.”

* She wrote that “Judge is one of the Founders and a man who has ever been true to the Masters. … And Judge will be the President of the T.S. [i.e. Theosophical Society] after our death or the T.S. will die with us.”

* At the start of the first of her “Five Messages to the American Theosophists” she addresses him, saying, “It is to you chiefly, if not entirely, that the Theosophical Society owes its existence in 1888.”

* She emphatically informed A. P. Sinnett that “Judge – KNOWS.”

* The Master M. (his own Guru, who was also the Guru of HPB) wrote regarding him that “For the first year or two no better guide can be had. For when the ‘PRESENCE’ is upon him, he knows well that which others only suspect and ‘divine.’ … greater services may be rendered to him, who, of all chelas, suffers most and demands, or even expects the least.”

* The same Master also wrote to a German Theosophist, “Be friendly towards W.Q. Judge. He is true, faithful and trustworthy,” and later sent to Judge through HPB a photo of himself which he had signed on the back, addressing him as his trusted colleague.

* “He or she, who believes that under any circumstances whatever, provocations, gossips, slander or anything devised by the enemy H.P.B. will ever dream even of going against W.Q.J. – does not know H.P.B. – even if he or she does know H.P. Blavatsky, or thinks he knows her. . . . The Esoteric Section and its life in the U.S.A. depends on W.Q.J. remaining its agent & what he is now. The day W.Q.J. resigns, H.P.B. will be virtually dead for the Americans. . . . PS. W.Q.J. had better show, & impress this on the mind of all those whom it may concern. – H. P. B.”

* In a letter of 1889, she told him, “Believe me when I say this I speak on authority; and he now believes you too, the same soul of honour; for I told him that you were a great deal better than I am, or Olcott ever was, & such is my honest opinion. . . . Now be so kind as to write to me plainly (so that I could read) what you expect me to do, & what I must not do. And I give my word that I shall follow your instructions. Let us understand each other, both of us, mutually.”

* HPB wrote to him in 1886, “Others have occasionally their astrals changed and replaced by those of Adepts (as of Elementaries) and they influence the outer, and the higher man. With you, it is the NIRMANAKAYA not the ‘astral’ that blended with your astral.”

The simple fact, made increasingly apparent from the above, is that one cannot claim to respect and revere H. P. Blavatsky unless one also respects and reveres William Quan Judge, nor can one be considered a true student of HPB unless one is also willing to become a true student of her fellow Teacher and fellow Initiate. There is no way around this for the Adyar Theosophists or others. What is on record speaks for itself.

NEWEST ARTICLE
William Q. Judge and The Masters of Wisdom