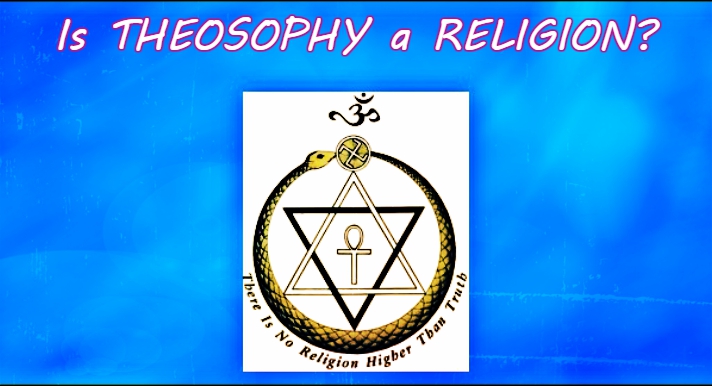 EXCERPTS FROM THE ARTICLE BY H.P. BLAVATSKY

“What, then, is Theosophy, and how may it be defined in its latest presentation in this closing portion of the XIXth century?

“Theosophy, we say, is not a Religion.

“Yet there are, as everyone knows, certain beliefs, philosophical, religious and scientific, which have become so closely associated in recent years with the word “Theosophy” that they have come to be taken by the general public for theosophy itself. Moreover, we shall be told these beliefs have been put forward, explained and defended by those very Founders who have declared that Theosophy is not a Religion. What is then the explanation of this apparent contradiction? How can a certain body of beliefs and teachings, an elaborate doctrine, in fact, be labelled “Theosophy” and be tacitly accepted as “Theosophical” by nine-tenths of the members of the T.S., if Theosophy is not a Religion? – we are asked.

“To explain this is the purpose of the present protest.

“It is perhaps necessary, first of all, to say that the assertion that “Theosophy is not a Religion,” by no means excludes the fact that “Theosophy is Religion” itself. A Religion in the true and only correct sense, is a bond uniting men together – not a particular set of dogmas and beliefs. Now Religion, per se, in its widest meaning is that which binds not only all MEN, but also all BEINGS and all things in the entire Universe into one grand whole. This is our theosophical definition of religion; but the same definition changes again with every creed and country, and no two Christians even regard it alike. . . .

“Thus Theosophy is not a Religion, we say, but RELIGION itself, the one bond of unity, which is so universal and all-embracing that no man, as no speck – from gods and mortals down to animals, the blade of grass and atom – can be outside of its light. . . .

“Furthermore, there is this also to be added: the number of those who left can hardly be compared with the number of those who found everything they had hoped for in Theosophy. Its doctrines, if seriously studied, call forth, by stimulating one’s reasoning powers and awakening the inner in the animal man, every hitherto dormant power for good in us, and also the perception of the true and the real, as opposed to the false and the unreal. Tearing off with no uncertain hand the thick veil of dead-letter with which every old religious scriptures were cloaked, scientific Theosophy, learned in the cunning symbolism of the ages, reveals to the scoffer at old wisdom the origin of the world’s faiths and sciences. It opens new vistas beyond the old horizons of crystallized, motionless and despotic faiths; and turning blind belief into a reasoned knowledge founded on mathematical laws – the only exact science – it demonstrates to him under profounder and more philosophical aspects the existence of that which, repelled by the grossness of its dead-letter form, he had long since abandoned as a nursery tale. It gives a clear and well-defined object, an ideal to live for, to every sincere man or woman belonging to whatever station in Society and of whatever culture and degree of intellect. Practical Theosophy is not one Science, but embraces every science in life, moral and physical. It may, in short, be justly regarded as the universal “coach,” a tutor of world-wide knowledge and experience, and of an erudition which not only assists and guides his pupils toward a successful examination for every scientific or moral service in earthly life, but fits them for the lives to come, if those pupils will only study the universe and its mysteries within themselves, instead of studying them through the spectacles of orthodox science and religions. . . .

“The just published “Secret Doctrine” will show what were the ideas of all antiquity with regard to the primeval instructors of primitive man and his three earlier races. The genesis of that WISDOM-RELIGION, in which all theosophists believe, dates from that period. So-called “Occultism,” or rather Esoteric Science, has to be traced in its origin to those Beings who, led by Karma, have incarnated in our humanity, and thus struck the key-note of that secret Science which countless generations of subsequent adepts have expanded since then in every age, while they checked its doctrines by personal observation and experience. The bulk of this knowledge – which no man is able to possess in its fullness – constitutes that which we now call Theosophy or “divine knowledge.” Beings from other and higher worlds may have it entire; we can have it only approximately.

“Thus, unity of everything in the universe implies and justifies our belief in the existence of a knowledge at once scientific, philosophical and religious, showing the necessity and actuality of the connection of man and all things in the universe with each other; which knowledge, therefore, becomes essentially RELIGION, and must be called in its integrity and universality by the distinctive name of WISDOM-RELIGION. . . .

“Theosophy, as repeatedly declared in print and viva voce by its members and officers, proceeds on diametrically opposite lines to those which are trodden by the Church; and Theosophy rejects the methods of Science, since her inductive methods can only lead to crass materialism. Yet, de facto, Theosophy claims to be both “RELIGION” and “SCIENCE,” for theosophy is the essence of both. It is for the sake and love of the two divine abstractions – i.e., theosophical religion and science, that its Society has become the volunteer scavenger of both orthodox religion and modern science; as also the relentless Nemesis of those who have degraded the two noble truths to their own ends and purposes, and then divorced each violently from the other, though the two are and must be one.”

SOME RELATED ARTICLES: Theosophy – An Explanation and Overview, 12 Things Theosophy Teaches, Theosophy: The Ancient Wisdom, Unity of the World’s Religions, H.P. Blavatsky and The Birth of the Theosophical Movement, Responding to Lies about H.P. Blavatsky, Praise for H.P. Blavatsky and Theosophy, The Four Branches of the Theosophical Movement, The Theosophical Society is Disloyal to Theosophy, The Ignorance and Conceit of Modern Science, An Invitation to The Secret Doctrine, A Beginner’s Guide To Studying The Secret Doctrine, Dismantling the Christian Edifice, Greetings from “Lucifer” to the Archbishop of Canterbury! and The Task & Responsibility of Theosophists – Some Serious Warnings.