At various times over the course of the past several decades, an issue has 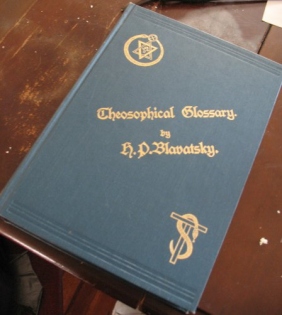 been raised in certain quarters of the Theosophical world regarding whether or not the book titled “Theosophical Glossary” should be properly considered to be the work of H.P. Blavatsky.

It is well known that HPB was working on the Glossary up until the time of her death in May 1891 and that she thus passed away before it was completed or published.

In January 1892, the English Theosophist G.R.S. Mead published the book – which bears the words “Theosophical Glossary by H.P. Blavatsky” on the cover – and wrote in the preface that “The Theosophical Glossary labours under the disadvantage of being an almost entirely posthumous work, of which the author only saw the first thirty-two pages in proof. This is all the more regrettable, for H.P.B., as was her wont, was adding considerably to her original copy, and would no doubt have increased the volume far beyond its present limits, and so have thrown light on many obscure terms that are not included in the present Glossary.”

That first sentence has apparently been misunderstood or misinterpreted by a number of Theosophists, some of whom have chosen to read it as, “The Theosophical Glossary was written almost entirely by others after HPB’s death and she herself only wrote the first thirty-two pages of it.”

But this is obviously not what Mead was implying. The reason it was “an almost entirely posthumous work” was because only a small portion of its contents had been published while HPB was still alive, such as in the sixty page Glossary she included at the end of the second edition of her book “The Key to Theosophy,” at the conclusion of which she wrote, “Readers requiring fuller information about any particular term should consult THE THEOSOPHICAL GLOSSARY now in preparation.”

And the statement that HPB “only saw the first thirty-two pages in proof” is not the same as saying that she only ever saw the first thirty-two pages of the 389 page book. It is simply saying that she never had the opportunity to double check all that she had written in order to confirm that it was ready for publication, let alone complete the volume to the full extent originally intended by her.

Hence the “Theosophical Glossary” is by no means complete or exhaustive – although it does contain many entries for every letter, right through from A to Z – nor are all the entries necessarily exactly as they would have been had HPB lived longer and been able to oversee the publication of the work herself, and these are facts which no Theosophist has ever denied.

What we do deny, however, is the ridiculous and unsubstantiated assertion – made assuredly in good faith but through a mangling of the above facts – that the book “should not bear H.P. Blavatsky’s name as its author,” “Helena Blavatsky is not its author,” the “authorship is wrongly ascribed to Helena P. Blavatsky,” “Its Editor, G.R.S. Mead, wrongly used Helena P. Blavatsky’s name,” and the subsequent referral to the work as “Mead’s Glossary”…all of which statements appear in a newly published online article by a Theosophist whose work and unrelenting efforts for the Theosophical Cause we respect too highly to name, lest this should be misinterpreted as a personal criticism or, worse, as an “attack.”

There are a number of Theosophists who have adopted this or similar viewpoints over the years but there is no clear logic behind it. To imply that G.R.S. Mead was himself responsible for the majority of the Glossary entries is to take a gigantic and illogical leap from the given statements and ascertainable facts to a patently erroneous conclusion.

A careful and comprehensive study of the entire contents of the “Theosophical Glossary” will show that many of the entries are derived from the books and articles written and published by HPB during her lifetime and here collated topically and alphabetically for the easy reference of the student of Theosophy, others are reproduced from the Glossary included at the end of “The Key to Theosophy,” whilst numerous other entries can be found nowhere else in the Theosophical literature but go into such profound depth on esoteric subjects – and in the customary style and language of HPB – that their value and authorship cannot be legitimately questioned.

Take for example, in this regard, the entries for Triratna, Trisharana, Materializations, Manodhatu, Trailokya, Trikaya, Trimurti, Mesmer, Kamadhatu, Kamaloka, Kamarupa, Aryasangha, Yogacharya, Avalokiteswara, and Aura. There are certain statements, sentences, and “clues,” in those entries and many others besides, which are of great worth to the students of H.P. Blavatsky. Plus, many intriguing and half-veiled insights about the nature and teachings of the esoteric Yogacharya School of “pure Buddhism” (see the recent article Alaya – The Universal Soul) are scattered throughout the volume.

If it be the case that there are a number of “mistakes” and “errors” in the “Theosophical Glossary,” HPB herself cannot justifiably be blamed for this, seeing as Mead’s preface makes it perfectly clear that she passed away without having the chance to review and, if necessary, revise all that she had written, in order to make it ready for approved publication. One should always bear in mind, however, that over the years a number of Theosophists have – almost jubilantly – “found mistakes” in HPB’s writings, only for it to later be discovered that the fault finders were themselves at fault and that HPB had been right all along.

One such individual was the late Boris de Zirkoff who, incidentally, was one of the first people to imply that the authorship of the “Theosophical Glossary” should not be attributed to HPB.

The Dutch Theosophist Henk Spierenburg, now also sadly deceased, discovered and stated in print that de Zirkoff had been too hasty in some of his “corrections” and annotations to the writings of HPB in the “Collected Writings” series. Unfortunately Spierenburg himself was not above mistakenly attributing error to HPB and also to T. Subba Row, particularly in regard to their usage of certain Sanskrit terms, in which he seems to have misguidedly viewed himself as something of an expert.

We maintain then that it is perfectly correct and accurate to attribute the authorship of “Theosophical Glossary” to H.P. Blavatsky, providing the reader keeps in mind that it was published posthumously, and that Theosophy Company (the publishing arm of the United Lodge of Theosophists) are not only well within their rights to publish and sell it as such but are at the same time doing a great service to all Theosophical students.

Mead adds in his Preface to the volume that “The Theosophical Glossary purposes to give information on the principal Sanskrit, Pahlavi, Tibetan, Pali, Chaldean, Persian, Scandinavian, Hebrew, Greek, Latin, Kabbalistic and Gnostic words, and Occult terms generally used in Theosophical literature, and principally to be found in Isis Unveiled, Esoteric Buddhism, The Secret Doctrine, The Key to Theosophy, etc.; and in the monthly magazines, The Theosophist, Lucifer and The Path, etc., and other publications of the Theosophical Society.”

It certainly does this and, despite its clearly stated incompleteness and occasional minor errors from being published without having been proof-read, it remains of great value to all earnest students of Theosophy and infinitely more reliable than many of the entries contained in the Glossaries published or prepared by G. de Purucker, such as his “Occult Glossary,” in which quite a number of the terms are defined according to his own interpretation of the Theosophical teachings, that interpretation differing in numerous aspects from the Theosophy that was presented to the world by H.P. Blavatsky.

Sadly, the Theosophical Movement seems to have more than its fair share of pseudo-scholars and self-proclaimed “experts” and “historians,” many of whom seem to view the Movement as something akin to a dead animal, to be coldly, analytically, academically, and intellectually picked at, dissected, categorised, and classified, if not torn apart. When HPB stated not long before she passed away that the incessant cry of her heart was, “Be Theosophists, work for Theosophy!” it is doubtful that this is what she had in mind.

It is impossible to estimate how many sincere spiritual seekers and would-be Theosophists have been put off Theosophy for good after coming across some of the many online forums in which such people as those described above spend year after endless year repeating the same old worthless discussions (such as this “issue” of the Theosophical Glossary, for one) ad infinitum and usually not in a particularly polite or respectful manner either.

Although scholarship, history, and academic research all undoubtedly have their place, we would perhaps do well to remember what Theosophy and the Theosophical Movement is actually all about and then less time and energy will be wasted on ultimately irrelevant matters and better invested in the true help and service of suffering humanity.

What HPB wrote in the Introduction to “The Secret Doctrine” can be applied to her work at large, in that it “is written for the instruction of students of Occultism, and not for the benefit of philologists.”

6 thoughts on “Authorship of the Theosophical Glossary”