“Like the Universe itself, Science is ever becoming, and can never say, “I am that I 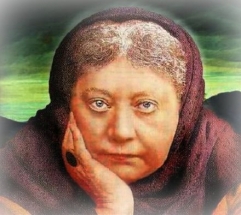 am.” On the other hand, Occult Science has its changeless traditions from pre-historic times. It may err in particulars; it can never become guilty of a mistake in questions of Universal laws, simply because that Science, justly referred to by philosophy as the “divine,” was born on higher planes, and was brought on Earth by beings who were wiser than man will be, even in the seventh Race of his Seventh Round. And that Science maintains that Forces are not what modern learning would have them; e.g., Magnetism is not a “mode of motion”; and, in this particular case, at least, exact “modern Science” is sure to come to grief some day. Nothing, at the first blush, can appear more ridiculous, more outrageously absurd than to say, for instance: “the Hindu initiated Yogi knows really ten times more than the greatest European physicist of the ultimate nature and constitution of light – both solar and lunar.” Yet why is the Sushumna ray believed to be that ray which furnishes the moon with its borrowed light? Why is it “the ray cherished by the initiated Yogi“? Why is the moon held as the deity of the mind, by those Yogis? We say, because light, or rather all its occult properties, every combination and correlation of it with other forces, mental, psychic, and spiritual, were perfectly known to the old adepts.

“Therefore, although, in its knowledge of the ultimate constitution of matter, or in the so-called ultimate analysis as opposed to the proximate in chemistry, occult science may be less well-informed as to the behaviour of compound elements in various cases of physical correlations: still, it is immeasurably higher in its knowledge of the ultimate occult states of matter, and of the true nature of matter, than all the physicists and chemists of our modern day put together.

“Now, if we state the truth openly and in full sincerity, namely, that the ancient Initiates had a far wider knowledge of physics – as a Science of Nature – than our Academies of Science, all taken together, possess, the statement will be characterized as an impertinence and an absurdity; for physical sciences are considered to have been carried in our age to the apex of perfection. Hence, the twitting query – “Can the Occultists meet successfully the two points, namely (a) the production of heat by friction – excitation of molecular motions; and (b) the conversion of heat into mechanical force, if they hold to the old “exploded” theory of heat being a substance or a fluid?”

“To answer the question, it must first be observed that the Occult Sciences do not regard either electricity or any of the forces supposed to be generated by it, as matter, in any of the states known to physical Science; to put it more clearly, none of these “forces,” so-called, are either solids, gases, or fluids. If it did not look pedantic, an Occultist would even object to electricity being called a fluid – as it is an effect and not a cause. But its noumenon, he would say, is a conscious cause.”