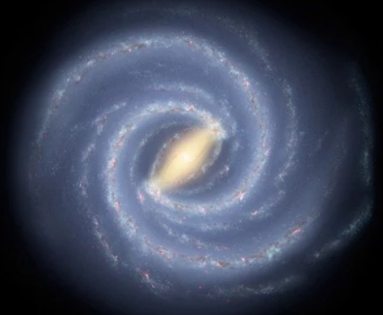 Modern science tells us that our own solar system (consisting of our sun, our Earth, and the other planets best known to us) is located at the edge of one of the spiral arms – the one which has been named the Orion Arm – of the Milky Way Galaxy. Scientists currently estimate that there are a further 100-billion to 400-billion solar systems within the Milky Way Galaxy. They also say that there are millions or billions of other galaxies, each of which may contain a similar number of solar systems. The collectivity of these many galaxies is what constitutes the Universe.

The Milky Way is also said to contain a huge mass of dust and gas. “Dust” and “gas” sound rather dull and unappealing but what they actually are in this case, according to the teachings of Theosophy, is particularly interesting.

In the first volume of her major work “The Secret Doctrine,” H. P. Blavatsky translates Seven Stanzas on the subject of Cosmogenesis or Cosmic Evolution from an ancient and still publicly inaccessible esoteric text referred to as the Secret Book of Dzyan. The third of those Stanzas is titled “THE AWAKENING OF KOSMOS” and, describing the cyclic rebirth and re-manifestation of the Universe, says in its fourth shloka or verse:

“THE LUMINOUS EGG, WHICH IN ITSELF IS THREE, CURDLES AND SPREADS IN MILK-WHITE CURDS THROUGHOUT THE DEPTHS OF MOTHER, THE ROOT THAT GROWS IN THE DEPTHS OF THE OCEAN OF LIFE.”

Commenting on this, HPB writes:

““The radiant essence curdled and spread throughout the depths” of Space. From an astronomical point of view this is easy of explanation: it is the “milky way,” the world-stuff, or primordial matter in its first form. . . . The curds are the first differentiation, and probably refer also to that cosmic matter which is supposed to be the origin of the “Milky Way” – the matter we know. This “matter,” which, according to the revelation received from the primeval Dhyani-Buddhas, is, during the periodical sleep of the Universe, of the ultimate tenuity conceivable to the eye of the perfect Bodhisatva – this matter, radical and cool, becomes, at the first reawakening of cosmic motion, scattered through Space; appearing, when seen from the Earth, in clusters and lumps, like curds in thin milk. These are the seeds of the future worlds, the “Star-stuff.”” (“The Secret Doctrine” Vol. 1, p. 67, 69)

“It is the store-house of the materials from which the stars, planets and other celestial bodies are produced. Matter in this state does not exist on earth; but that which is already differentiated and found on earth is also found on other planets and vice-versa. But, as I understand, before reaching the planets from its condition in the Milky Way, matter has first to pass through many stages of differentiation.” (p. 113-114)

“. . . all the planets in our solar system . . . began life as wanderers over the face of the infinite Kosmos. They detached themselves from the common storehouse of already prepared material, the Milky Way (which is nothing more or less than the quite developed world-stuff, all the rest in space being the crude material, as yet invisible to us); then, starting on their long journey they first settled in life where conditions were prepared for them by Fohat, and gradually became suns. Then each sun, when its Pralaya arrived, was resolved into millions and millions of fragments. Each of these fragments moved to and fro in space collecting fresh materials, as it rolled on, like an avalanche, until it came to a stop through the laws of attraction and repulsion, and became a planet in our own, as in other systems, beyond our telescopes. The sun’s fragments will become just such planets after the Solar pralaya.” (p. 145-146)

To summarise, the point is being made that at least part of what gives the Milky Way its milky or cloudy appearance (to us) is that it contains scatterings of Primordial Matter “in its first form.” It is thus the “storehouse” of matter in a state so extremely rarefied and so close to its original primordial state – the latter of which is often called by Theosophists Mulaprakriti or pre-cosmic root substance, the Eternal Matter – as to be inconceivable to us.

In “The Secret Doctrine Dialogues,” a question is put to HPB by William Kingsland, who asks, “Then is that Milky Way, as astronomers suppose, so far outside the limits of the solar system, or is that only an appearance? The astronomers suppose that the Milky Way lies far beyond the distance of the furthest fixed stars that we can see; is that actually the case, or is that a deceptive appearance?”

HPB’s response is that “it is a deceptive appearance; it is very deceptive, because this thing that we see, it is only because it is at a distance that we see it, but this thing actually exists everywhere, in the atmosphere and everywhere. It is not that there is a particular thing at such and such a distance, so many miles away; it is perfect nonsense, because it is everywhere, though only at a certain distance we see it. . . . This is what we call the prepared world-stuff which is ready for use, which has been differentiated and redifferentiated and combed out and everything has been done to it.” (“The Secret Doctrine Dialogues” p. 316)

By partial analogy, if you imagine floating up to the ceiling of the room you are in right now and then looking down, you can see the whole of your room, as if from a distance, but in reality you were always surrounded by the room, existing within the room, contained in the atmosphere of the room, and with the room all around you.

The term “Central Sun,” “Central Spiritual Sun,” or “Great Central Sun,” is used numerous times in Theosophical literature. It does not refer to the sun we see in the sky nor to any material cosmic body. Information as to what this admittedly somewhat vague term really means is provided in “The Secret Doctrine” Vol. 2, p. 240:

“This “central sun” of the Occultists, which even Science is obliged to accept astronomically, for it cannot deny the presence in Sidereal Space of a central body in the milky way, a point unseen and mysterious, the ever-hidden centre of attraction of our Sun and system – this “Sun” is viewed differently by the Occultists of the East. While the Western and Jewish Kabalists (and even some pious modern astronomers) claim that in this sun the God-head is specially present . . . the Eastern Initiates maintain that, as the supra-divine Essence of the Unknown Absolute is equally in every domain and place, the “Central Sun” is simply the centre of Universal life-Electricity; the reservoir within which that divine radiance, already differentiated at the beginning of every creation, is focussed. Though still in a laya, or neutral condition, it is, nevertheless, the one attracting, as also the ever-emitting, life Centre.”

The last part is so important as to warrant repetition:

“the “Central Sun” is simply the centre of Universal life-Electricity; the reservoir within which that divine radiance, already differentiated at the beginning of every creation, is focussed. Though still in a laya, or neutral condition, it is, nevertheless, the one attracting, as also the ever-emitting, life Centre.”

The careful reader will also have noticed the implication made by HPB that a vital connection and relation exists between the “Central Spiritual Sun” and the Milky Way.

More specifically, “a central body in the milky way, a point unseen and mysterious, the ever-hidden centre of attraction” is the connection-point with that equally or even more mysterious “focus” of DIVINE RADIANCE.

And what is that “central body” or “point” within the Milky Way? Science tells us that the entire Milky Way “orbits around a hub of sorts called the Galactic Centre, with a supermassive black hole called Sagittarius A* (pronounced “A-star”) at its core.” If exoteric science and Esoteric Science could but work together, many complementary and remarkable discoveries and understandings might be arrived at.

It was only in the 1960s that astronomers first began to suspect that the Milky Way is actually of spiral formation or, as they express it, a “barred spiral galaxy.” This is now common knowledge.

“It is a law that everything proceeds spirally, it never goes in straight lines. . . . There is nothing in this world that can proceed otherwise than in spirals, or on such things as that, but never in the direct line, never.” (p. 358)

This may be part of the reason why “The Secret Doctrine” Vol. 2, p. 356, says that “figuratively, the astral light, the milky way, and also the path of the Sun to the tropics of Cancer and Capricorn, as well as the circles of the Sidereal or Tropical year, were always called “Serpents” in the allegorical and mystic phraseology of the adepts.”

CLICK HERE FOR THE COMPLETE LIST OF OVER 300 ARTICLES ON ALL ASPECTS OF THEOSOPHY AND THE THEOSOPHICAL MOVEMENT.