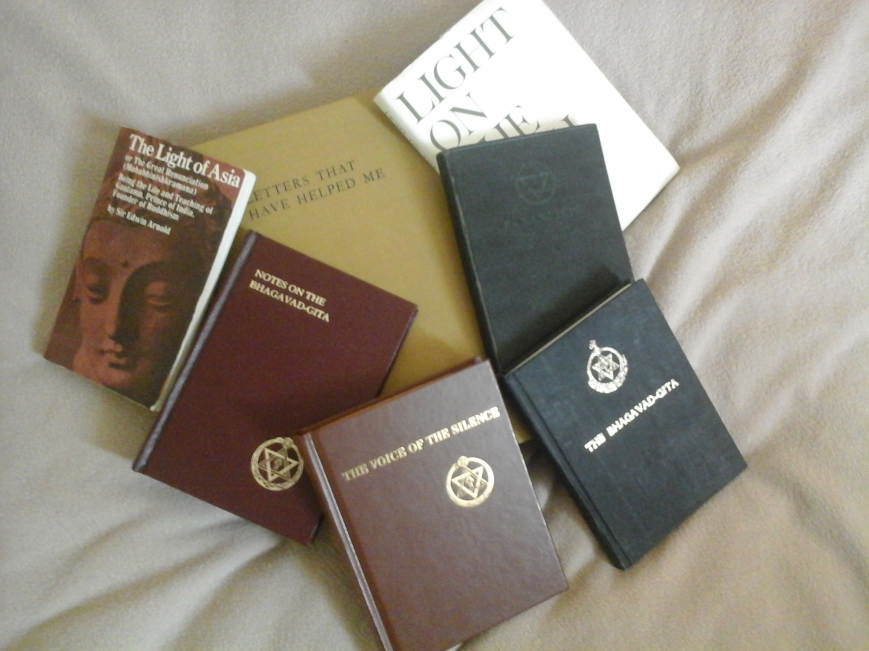 Many people, both outside and within the Theosophical Movement, seem to think that Theosophy is something purely theoretical or intellectual. This is simply not true.

Alongside such important books as “The Secret Doctrine,” “The Key to Theosophy,” “Isis Unveiled,” and “The Ocean of Theosophy,” there is also a well defined group of books which are often referred to as the “devotional books.”

Robert Crosbie, founder of the ULT (United Lodge of Theosophists), once wrote, “There is plenty of material, as well as help, in the devotional books to the realization of the heart doctrine, for they are designed to awaken the Buddhic faculty – that of Intuition, the only means by which light can come to you or anyone. … You have had much of the intellectual side; there should be as much of the devotional; for what is desirable is the awakening of the spiritual consciousness, the intuition – Buddhi – and this cannot be done unless the thoughts are turned that way with power and purpose.” (“The Friendly Philosopher” p. 9, 13)

There should be “AS MUCH” of the devotional, for true Theosophy is the Heart Doctrine, not the Eye Doctrine or Head Doctrine warned against in “The Voice of the Silence.”

An old issue of “Theosophy” magazine once said that the devotional literature is for “those who find the Teachings of Theosophy expressive of their highest ideals and conformable to reason and experience, and who are desirous of entering the PATH.”

The most important and powerful of these books is “The Voice of the Silence,” translated by H.P. Blavatsky from the Book of the Golden Precepts. Next comes the Bhagavad Gita, the ancient Indian Theosophy of 5,000 years ago, translated with such remarkable clarity by HPB’s most trusted colleague and co-founder William Q. Judge. There is also Judge’s rendition of the famous Yoga Aphorisms of Patanjali and his “Notes on the Bhagavad Gita,” completed after his death by his pupil and colleague Robert Crosbie.

The Dhammapada – the most well known compilation of the sayings and precepts of Buddha – is also part of this literature, as is “The Light of Asia,” Sir Edwin Arnold’s masterful poetic account of the life and teachings of the Buddha. There is also “Light on the Path,” a short but profound treatise recorded by Mabel Collins from the Master Hilarion.

Many wise, helpful, practical, and inspiring letters from William Judge to numerous Theosophists all over the world have also been published as “Letters That Have Helped Me,” three volumes bound in one.

It is interesting to note that HPB requested that passages from the Bhagavad Gita and “The Light of Asia” be read at her funeral and on the anniversary of her passing each year. This occasion came to be known as White Lotus Day.

The student of Theosophy may succumb to a lack of balance between Manas (or the “head”) and Buddhi (or the “heart”) if he confines himself primarily or solely to the more intellectually stimulating of the books. But also – and we see this particularly in the New Age movement to an alarming extent – there is a great risk of developing the heart forces while neglecting the mental and intellectual forces.

The ideal is to attain the perfect and healthy balance of the two. This can be achieved through making use of the whole of the Theosophical literature, which provides us with everything we need at this point in time.

All the books mentioned above can be obtained most affordably through Theosophy Company, the publishers for the ULT. The majority of ULT Lodges around the world also offer an inexpensive mail order service for Theosophical books.

“Search for the Paths. But, O Lanoo, be of clean heart before thou startest on thy journey. Before thou takest thy first step, learn to discern the real from the false, the ever-fleeting from the everlasting. Learn above all to separate Head-learning from Soul-wisdom, the “Eye” from the “Heart” doctrine.” – The Voice of the Silence

SOME RELATED ARTICLES: An Invitation to The Secret Doctrine, Who are you, Madame Blavatsky?, The Masters and Madame Blavatsky, Who was William Quan Judge?, The Two Paths, The Yoga of Purity, Practical Theosophy, Prayer, Karma, and Compassion, Helpful Hints for Spiritual Progress, Meditation Advice, B.P. Wadia on Theosophical Meditation, The Psychic is not the Spiritual, The Whitewashing of Black Magic, and The Danger and Deception of Channelling.

6 thoughts on “The Devotional Books”