“The Theosophical Movement under the leadership of H. P. Blavatsky and Mr. Judge was militant, if not revolutionary, in 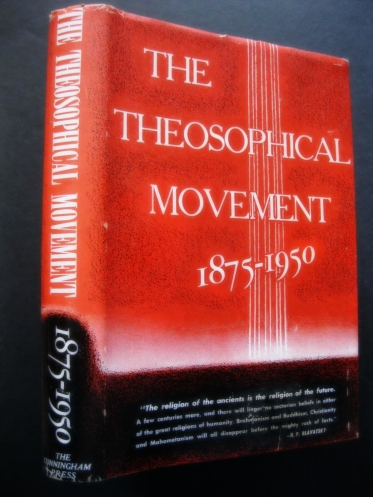 relation to the religious, intellectual, and social status quo. It challenged the dogmas of religion, the materialism of science, and the hypocritical morality of everyday life in the West. But as the atmosphere of sectarianism seeped back into the organizations calling themselves “Theosophical,” priestly claims and “occult” posturing took the place of moral courage, while the authority of new Theosophical “Revelations” discounted vigor in individual reflection and the application of Theosophical principles. When the members of Theosophical Societies began to speak reverently of “God” and “God’s Plan,” or to resort to similar forms of religious anthropomorphism, the Movement was no longer a threat to the security of the churches – it had become a mere imitator of the churches – and the criticisms which both science and Theosophy had once directed at organized religion now became logically applicable to the Theosophical societies themselves. No scientist, therefore, need take Theosophy seriously, so long as it was represented to him by such societies. Eighteenth-century skepticism and nineteenth-century agnosticism had dealt effectively and sufficiently with this brand of supernaturalism. In contrast to such “Theosophy,” it was the scientists – or many of them – who stood for moral courage in the search for truth, while the Theosophists had become a sect of mild conformists, having, perhaps, a new theological vocabulary, but offering no real challenge to the mind of the age.”

“The analogy of nature suggests that with the departure of the Teacher from the field, a redistribution of responsibility takes place. This is the true successorship – a succession to responsibility, not to “authority.” With both H.P.B. and Judge gone from the physical scene, the responsibility for the future of the Movement lay with those who were left. Then, when the individuals most prominent in the work gave unmistakable evidence of having lost their balance, the major responsibility again shifted, this time to the rank and file of theosophists throughout the world. It was now no longer a matter of “membership” or of affiliation with the “true” society. There were no “true” societies, in the organizational sense, but only more or less true individuals, men and women who realized that the spread of Theosophy meant the spread of Theosophical ideas, and not the numerical growth of some Theosophical organization.”

You may also like to read some related articles such as From Theosophical Society to Bizarre Quasi-Catholic Anti-Blavatsky Cult?, Original Theosophy and Later Versions, The Case against C. W. Leadbeater, Tibetan Master or Christian Priest? (Uncovering the real inspiration behind the Alice Bailey Books), Theosophy, The Jesuits, & The Roman Catholic Church, What Does Theosophy Say About God?, and The Four Branches of The Theosophical Movement.

“One of such objects of our Society we are willing to publicly announce. It is universally known that this most important object is to antagonize Christianity and especially Jesuitism. . . . The nefarious designs of Jesuitism are plotted in secret and carried out through secret agencies. . . . We have among us persons in high position – political, military, financial and social – who regard Christianity as the greatest evil to humanity, and are willing to help pull it down. . . . The Church – “triple-headed snake” as a well-known writer calls it – can no longer burn its enemies, but it can blast their social influence; can no longer roast their bodies, but can ruin their fortunes. . . . And so far from its threatening in any respect the stability of society or the advancement of spiritual knowledge, the Theosophical institution . . . will be found some day, by . . . all others who claim the right of thinking for themselves, to have been the true friend of intellectual and spiritual liberty. . . . Its name will be respected as a pioneer of free thought and an uncompromising enemy of priestly and monkish fraud and despotism.”